Tommy’s Tarbukas sheet music. This tune is an absolute must play tune once you have heard it. Though the tune is a reel it doesn’t sound directly like one. This might be due to all accents in the second part of the tune. Another reason might be that it sounds a bit unusual for an Irish tune since the best known recording by Alasdair Fraser is with piano which is not so common in Irish music. 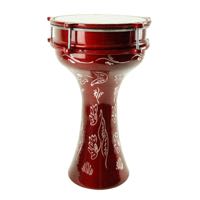 I wondered what a tarbuka is and it appears to be originally an Arabic/African drum also known as a goblet drum. This explains the title and percussion in the tune. So altogether a nice piece of crossover Irish-African music.

In the sheet music below you can find the notes and chords of the tune. The tune is in B-flat so in its original key it is not possible to play on a D-tin whistle. Of course a B-flat low whistle will do, but I decided to play it on soprano saxophone instead.

On the YouTube video you will hear the studio version of the tune from the album The Road North by Alasdair Fraser.